Welcome to the July 4th weekend edition of Carol's Corner. As I will be doing another feature here in this issue, I will again leave it up two days as I have the last two features. And Sunday night/Monday morning I will continue with the diet series I'm in the middle of. We'll only spend a few seconds on my pics and then it's off to the races. Calling this outfit”Tropical Nights”.

Tonight you are going to be privileged to hear the journey of Misty M. Frost, and an emotional one it is. Get ready to shed a few tears.

As usual pictures say it all. Meet Misty, before and after.

Here is Misty's story in her own words.

I can distinctly remember the day I wanted to die. It wasn't that I was suicidal, nor was I actually contemplating taking my own life. I had three babies and profoundly understood that this course of action was not even remotely desirable to me. I wasn't maniacally depressed, I was simply miserable.

The previous three years had swirled by akin to a whirlwind and I would often sit and stare at the three babies who ran amuck. I would silently shake my head and ponder who they were and how they seemingly appeared out of thin air. My husband had been raised in foster care and was used to being carted to new homes every few years, so early in our relationship he had adamantly decided that we would have our children barely a year apart. I, like most young wives, thought that the world revolved around this man and so I rose to his every challenge. In the name of love I sacrificed my body, and almost my sanity, to provide him with the long-lost family that he claimed to so desperately desire.

Like clockwork, every six months we began to try for a new baby to add to the budding family that was growing like a field of weeds. However, as I marched militantly down maternity wards, armed with the trappings of new motherhood, he directed his focus away from being a tried and true father, back to being a young and carefree individual.

I was heartbroken as I found countless pictures of hundreds of scantily clad women on our computer time and time again. I was devastated when he would stare at young, firm bodies as I wobbled around , fat and pregnant, once again. I desired his attention and affection more than air itself and this attention was constantly being bathed on other women. He supported our family financially, however this was the extent of his involvement at this moment in time. Between the years of 2004 and 2007 I was pregnant a total of five times. Yes, five pregnancies in three years.

In the course of those five pregnancies I suffered two miscarriages, one before my oldest child, and one before my youngest child. It was through these miscarriages that I began to internalize the negativity that was being spewed from the interactions in my marriage, and I spiraled into a very dark place mentally, emotionally and finally physically. After the birth of my youngest I reached my heaviest weight and my husband reached his farthest point of emotional escape from our family. After knowing in my heart that his claims of marital faithfulness were lies, I began to take inventory of myself.

I became intensely aware of the truth that I could not change him,nor control him, but I could control me. I began to look into exercise videos and told a limited number of people that I was going to lose the weight that had stockpiled during pregnancy, but when I voiced this dream to the man who should have been my biggest supporter, he laughed at me. It was at this moment my desire to die began to whisper into the corners of my heart.

In retrospect, I can now see where his antagonist behavior was truly a blessing in disguise. It was because of his constant emotional abuse and verbal hostility that I began to seek my identity outside of his approval. I silently thought about the conversations I longed to have as I spent long hours at home alone with the three babies sent to me from above. In the quiet of the house, after the babies bedtimes had passed, I began to not feel quite so alone. I was against the idea of returning to any form of organized religion and I made this a very understood fact within myself. However, in the silence, I began to form a very informal version of prayers. They would not be considered prayers by overly religious folks, as they resembled silent conversations more than homage. Yet, in the quiet whisper of the exchange I felt something take route within my soul. I felt accepted. I felt loved.

When my husband would leave I found myself meandering over to the Bible that I had owned since my teen years, but rarely opened. I would silently vow,” I'll read this, and I'll talk to you, but don't expect me to darken the door of a church….ever”.

As I read the words that I thought I knew, I began to understand who I truly was and the importance of who I was created to be. It did not matter what this physical man thought or said about me because my Creator thought I was amazing, the comparison seemed comical. The more I read the more I heard the gentle, quiet whisper in my heart say,” You can do anything you put your mind to doing. You can do it.”

In shame and embarrassment , I recalled my husband's calloused words and I snuck in workouts in the times he was working. My weight began to change and at times it felt as if the adjustment was so incredibly slow. I was so incredibly out of shape. I began my journey with walk at home DVD workouts and I vividly recall the day I ran the length of my dining room and celebrated in the fact that I had not died in the 15 ft jog. I finished my workout that day and the thought occurred in my heart, ” Someday I will run a 5K.” I'm slightly embarrassed to admit that I had to google the length of a 5K. When I read 3.1 miles I almost laughed at the notion, yet there in my heart, was that confident whisper, “You can do it.”

I am amazed and proud to admit that I have run those 3.1 miles more times than I can count. I could do it after all! I have lost nearly 120 pounds since my heaviest weight and I have set a Godly, healthy example for my babies, who are now children. My husband has matured considerably since those days and constantly apologizes for his treatment when I needed his support the most. We have benefitted from marriage counseling and assistance with sexual addiction issues, as a result a sense of balance has been restored to our lives.

Before Misty concludes the story of her journey here are some pictures to go with it.

After an initial 50 pound weight loss 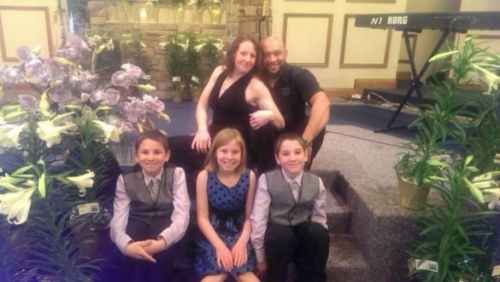 Love this one, beautiful family one 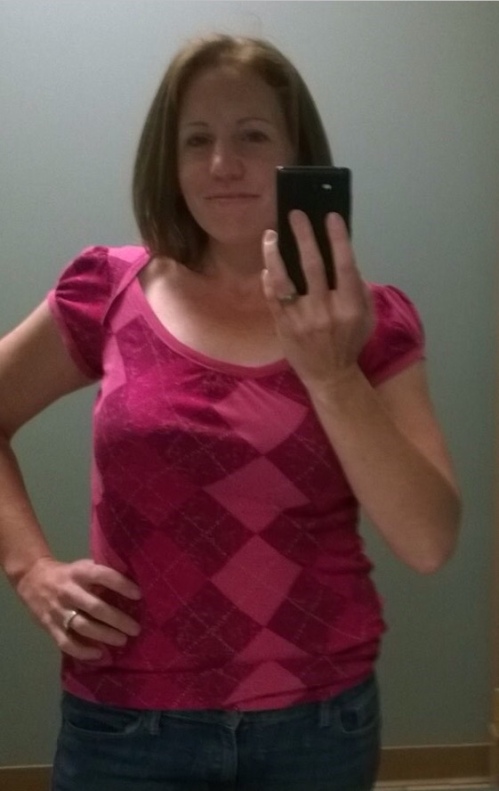 Now back to Misty's story in her own words.

On the other side of losing almost a whole person's worth of weight I can share a few tidbits with you.

1) You CAN DO IT! No matter who has said what, you are not defined by their words or your previous actions. You have the power and ability to change what you don't like about yourself. Where you lack power and ability there is an amazing God who is more than willing to fill in that gap for you. NO matter what.

2) Some things will not change, even with weight loss. If you eat out of boredom or emotions than you will have to learn how to deal with those effectively or you will set yourself up to yo-yo. Who you are as a person may be affected by your weight/fitness levels, but there will still be residual emotional issues awaiting you at the end of your journey , so it is best to deal with the emotional , spiritual, and physical as you go.

3) Many times we either hide behind food or punish with food. The ones who reward themselves with food tend to hide behind it, they will be the ones who say, ” I deserve this because….” But, do you deserve to cry in the dressing room when that extra piece of cake lands on your bum? The ones who punish with food do so out of an inherent sense of unworthiness, often instilled within them during their childhood years. You ARE VALUABLE. Intrinsically, completely, and totally valuable. Sometimes, like in my life, you must be the one to first express this revelation before others will recognize your value. However, never let another person's inability to see your worth make you doubt or deny its presence.

4) We are fundamentally made up of different parts and one of the areas that has to be maintained while addressing physical issues is your spiritual side. Regardless of what you have been led to believe, there is a God and he loves you more than you can fathom. He does not care about what hang ups, habits, or hurts you have, he can and will help you with any and all of them. Nothing, not your skin color,weight, or sexuality is a surprise to him, he will talk to you about anything, at anytime.

I believe wholeheartedly that anyone can do anything they put their mind and heart into achieving. When you aim high, you work harder, but you also end higher. Aim for the stars, my friends, if you want something, than go achieve it. If no one believes in you, then take one moment each day and tell the reflection in the mirror,”I believe in you.”

In the end, it doesn't matter if everyone believes in you, if you don't believe in yourself, you will never rise to the level you have been hand-designed to obtain. You are a warrior. Now go fight for your dreams.

Misty M. Frost may be contacted through her website at MistyMFrost.com or at Facebook.com/MistyMFrost

Thank you for taking the time to read my story!

There you have another remarkable story of yet another person's journey. I hope you are inspired and motivated by each one I am able to present here on my blog. I will leave this up for two days and then will get back to our diet ranking series we are still in the middle of. To those here in the states, have a great 4th of July weekend. Till next time, God bless.

One thought on “CAROL’S CORNER”