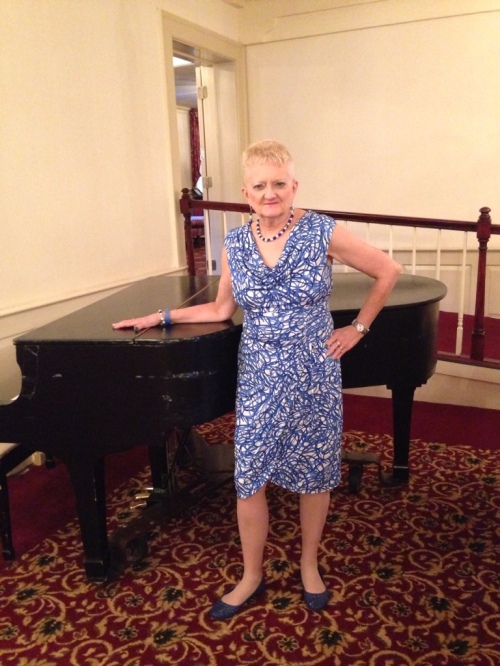 Welcome to Carol's Corner. I was going to do my scheduled blog, but due to unforeseen events, I've had to forgo that till next time. We've had a crazy night and morning, but we'are finally on the road to our next destination. But let's back up to the wonderful night we had before all our craziness. At the base they had a community social. They have it every Wednesday. We went for just awhile because we were going to a dinner dance at the officer's club. While we were there we mentioned where were going and this really nice young Air Force Cadet said she might stop over to see us dance . Well she did and we had the best time just talking to her. She's 25 and we're in our 60's but she really seemed to enjoy herself too. Just a wonderful,young woman. Her name is Natalia.

We took all kind of picture's. This is Natalia and I by the flag. We have one of her with my hubby too. Please pray for her 15 year old sister. She just yesterday had some kind of bladder surgery . She has a pretty serious problem. She was told she has the bladder of an 80 year old. She has to have the surgery again in a year. Worried if it causes serious kidney issues and she's so young. Her name is Samantha. So keep her in your prayers. 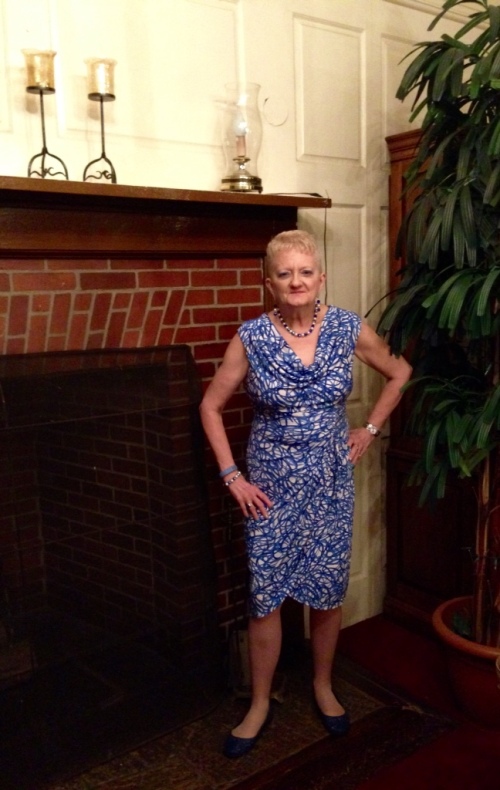 Here's another picture by a fireplace in the officer's club. I have loved this dress from the first time I saw it. Decided to call this “Swirling Skies”.

And as always, I have coordinating jewelry and my FitBit combo.

Let's move on to how my night and into today transpired. We planned to leave around 3 in the morning. So hubby slept (he's the driver). I had to do one load of laundry and fit in my workout , so I multi-tasked by starting the laundry and then doing my five mile workout. I have managed so far on my little vacation to work out every day and get a pretty good step count. Had to get the laundry in the dryer and while that dried, did the 10 minute mile from The Four Really Big Miles. So that made the six miles I was shooting for. Proceeded to get everything organized and packed and took a shower, washed my hair and got my traveling outfit on and redid my makeup. Woke hubby up right at three am. We got the car loaded and ready to go and that's when all the fun started. By then it was about 4 AM. The Garmin had been acting funny the night before and it just was not operating right at all. We couldn't figure out how to get off the base. All the gates aren't open. We're driving around and around. Mind you , Ft Belvior is like a small city. Finally John remembered the map he had and was able to figure out how to get to a gate that was open. He thought maybe the Garmin would work when we got off the base, but not to be. We think that two days before that the lightening must have struck it somehow , because we had a bad storm with lightening striking close by. We were driving around not knowing where we were for almost an hour . We stopped at this one station and kind of found out where there was a Walmart , but hubby didn't listen and we got even more confused. He couldn't even figure out which direction we were. He asked if there was a compass on my phone. At first I said no, but then I remembered there were a bunch of things I really hadn't payed attention to. There was a compass, but then I decided to investigate maps, not realizing I could make it be just like a GPS. I fiddled around and discovered we were 5 minutes from the Super Walmart and even more surprised when I played around some more and there comes a voice telling us how to get there. So I was pretty psyched that I was able to save the day. Hubby still wanted to buy a new Garmin , he got one but it was way to big, so we had to go get a different one, which was WAY cheaper. FINALLY we get started on our way. But that wasn't the ONLY problem. While we were in DC, he noticed the muffler was coming off the car and he wired it up with a coat hanger. The car is way noisy. Twice today he had to stop and fix it. We're going to have to go see what has to be done while we're in West Va. And in the middle of all that a check engine light came on and after that we got ready to go after a stop and the speedometer wouldn't function (it's digital) and cruise control stopped working also. Luckily the Garmin shows the speed you're going. Well later we made another stop and guess what? Everything starts working again that wasn't working and no more engine light. Just really bizarre. The trip was really kind of nice except part of the way I had cell signal issues so I couldn't do what I needed to. That's why I didn't finish this earlier. We are almost where we are headed now. This has been another day where persistance has paid off and taking things as they come and being able to overcome adversity, all of these are valuable lessons and tools we can use in our journey as we work to realize all the goals we set for ourself. So even though I couldn't do what I originally planned to do , things happen in life every day that can either make or break you. Use all of your experiences to make you see that you have everything in you to succeed on this journey. Before I close I'd to ask for special prayer for Kelly Reid Lester, one of my group members who lives in the United Kingdom. She just suffered her third miscarriage. She thought she had made it through this time because she was thirteen weeks. Pray for God's grace to be sufficient.I thank you in advance. Going to arrive at our friend's momentarily. Till next time, God Bless.