Welcome back to Carol's Corner. Sorry about not be able to post last night. Some weird things were happening on my I Pad and it took quite some time to figure out what had happened. Before I get started I'll be posting both sets of picture's first. This outfit is named ” Tropical Explosion”. Everything is tied together with the belt, the royal blue shoes, and the jewelry. 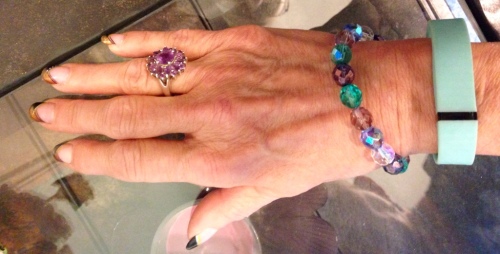 Now on to today's outfit.

Calling this one ” Designs In Geometry”. 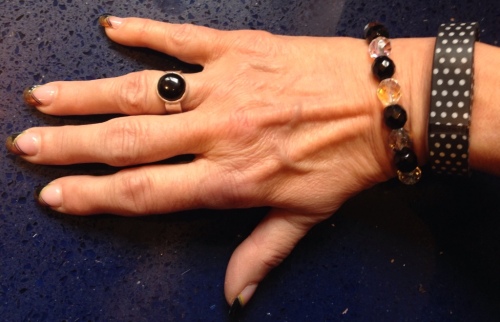 Alway's love when I can wear this black and white FitBit band. 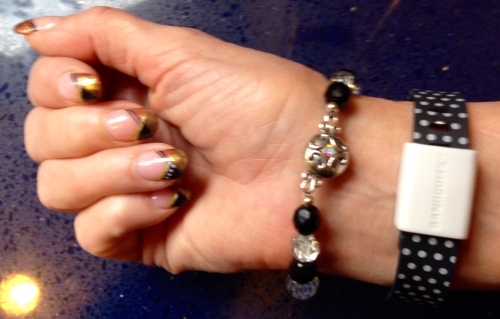 Ok , tonight we are going to talk about ways to control blood sugar levels . I am using an article from Reader's Digest, Best Health. It is titled ” 19 Tips For Stable, Steady Blood Sugar Levels”. As this is quite long we will divide this up into two parts.

Whether you already have diabetes, are overweight, or want to prevent future problems, here are 19 ways to make sure your blood glucose and insulin levels are as healthy as can be.( If you already have diabetes make sure you you check with your health care provider before you make any major lifestyle changes that could affect your blood sugar levels.)

Drink at least two servings of low-fat dairy products a day. (One serving is a 1cup glass of skim or 1% milk, or a 6.12 oz. container of yogurt). A study of 3,000 people found those who were overweight, but also ate a lot of dairy foods, were 70% less likely to develop insulin resistance ( a precursor to diabetes) than those who didn't. It turns out that lactose, protein, and fat in dairy products improves blood sugar by filling you up and slowing the conversion of food sugars to blood sugar.

Buy bread products with at least 3g of fiber and 3g of protein per serving. Complex carbohydrates of this type, slow down the absorption of glucose and decrease possible insulin rises. Plus, the hearty dose of fiber and protein will keep your stomach feeling satisfied for longer.

Serve up a spinach salad for dinner. Spinach is high in magnesium, which a large study suggests can help to prevent the development of type 2 diabetes. One study in women found higher intakes of magnesium ( also found in nuts, other leafy greens and fish) reduced diabetes risk by about 10% overall, and by 20% in women who were overweight. Another great source of magnesium? Avacados.

Sprinkle cinnamon over your coffee, yogurt, cereal, and tea. (Researchers from Pakistan where cinnamon is widely used) asked volunteers with type 2 diabetes to take either 1g, 3g, or 6g of cinnamon or a placebo for 40 days. Those taking the fragrant spice saw their blood-glucose levels drop by between 18 and 29 % depending on how much cinnamon they took.

Eat soba noodles for dinner one night. The “Japanese Pasta” is made from buckwheat, a grain that lowerered blood glucose levels by 12-19 % in one well-controlled study on rats. Of course you're not a rat, but buckwheat is an excellent source of fiber, and the evidence on fiber and blood glucose improvement is unquestionable.

Cut back on saturated fat. The reason to avoid saturate fat is simple. Scientists evaluated 3,000 people and found those with the highest levels of saturated fats were twice as likely to develop diabetes.

Walk for a mile to a mile and a half every day. (This publication doesn't use our system of measure's , so rounding numbers myself). That's all it took in one large U.S. study to slash the risk of dying from diabetes by more than a third. Believe it or not, if you walk 6.2 miles a week, you'll be 40% less likely to die from all causes, and 34%, less likely to die from heart disease, the leading cause of death in people with diabetes. The reason? Walking makes your cells more receptive to insulin, which leads to better control of blood sugar. It also raises the levels of “good” HDL chloresterol.

Rent a comedy and watch it after dinner. A Japanese study found that people who laughed soon after eating (while watching a comedy) had significantly lower blood sugar levels than those who listened to a boring lecture. The connection held even for those without diabetes.

That brings us to the end of part 1 on tips for stable, steady blood sugar levels. We will conclude with the last nine tips in tomorrow's issue of Carol's Corner. Until then, stay focused, stay committed , and head into the weekend ready to take it on and come out ahead of the game. Till next time, God Bless.