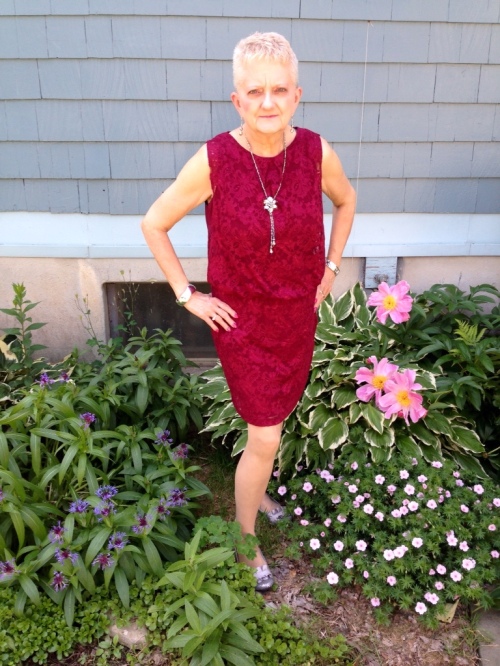 Welcome to the Sunday edition of Carol’s Corner. It’s Sunday’s even though it’s in the wee hours of Monday when it actually goes online. I think by now most people know I keep strange hours. It’s going to be a special night here in Carol’s Corner, as I will be featuring another person’s journey tonight. So let’s get my stuff out of the way. I’ll just let my two pictures speak for themselves and get right to it. 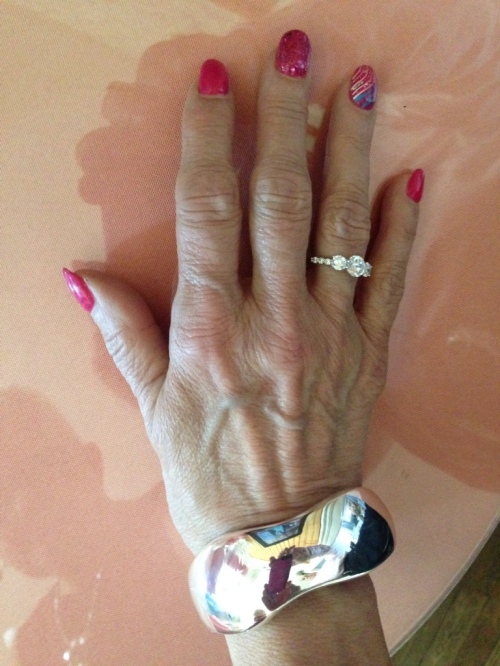 Tonight you will hear the story of 37 year old Laura Wright and wait till you see how beautiful she is. You will see her her journey travel from two opposite ends of the spectrum and back to where she is today Oh and by the way, there’s an interesting surprise in this story, one we just all might be a little envious of. But you’ll know what that is when we get to it. 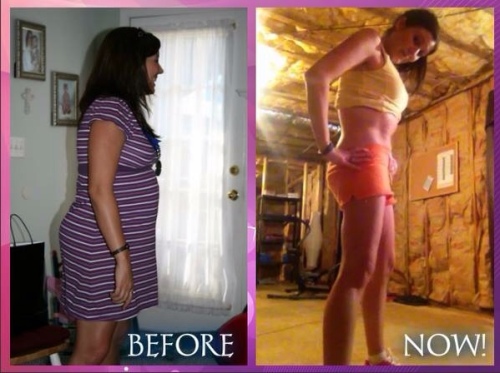 She has some great before and after pictures side by side and think I’m going to have to use them all. They do say pictures speak louder than words.

Is she just the cutest or what? Last side by side coming up and then we’ll start to hear her story and have more pictures for you. I like that she seems to have kept a pictorial diary of her journey. Wish I had thought of doing it at the time. 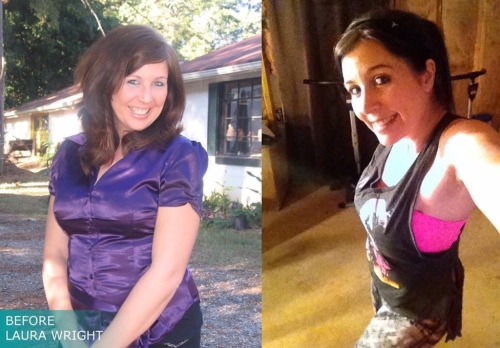 So here is Laura’s story in her own words.

I thought when I was younger that Weight Loss would never be a topic of mine. I grew up being thin all through school. I would get teased in school about my weight. Some would walk by me in the hallway and tell me to “Eat a Sandwich ” or call me “Bones”. I never understood why I could not gain weight back then. I used to eat and eat and EAT, hoping to put weight on so I could look like everyone else. Then at 15 I was diagnosed with Scoliosis. After seeing my X-ray( about a 40% curvature), I thought being thin just made it stand out even more. So most of the time I would eat junk food and would drink nothing but cokes. By the time that I turned 26 years old, my metabolism started to slow down and I started to put on weight. By the time I turned 30, I was considered to be overweight. On my small framed body I looked as if I was 6 months pregnant. By this time my eating habits were way out of control. I just kept gaining weight. ( slowly). Before I knew it at the age of 34 I got on the scale and weighed in at 158.8 lbs. ( Now she’s 5’5″, but she has a tiny frame as you can see in her pictures)

On February 20th, 2013, I decided I was going to sign up right then for Weight Watchers Online. I loved that I could track everything easily online. I also learned about portion control. I’m no longer a member because I have my water intake down, and know how many calories I can have without counting points.

That brings us to January 2014. Laura saw a blurb as she puts it, on Leslie Sansone’s Facebook page, saying they were looking for stories from folks to be featured in an infomercial. Well it ended up that Laura was one of 25 chosen out of 500,so she felt greatly honored. In March of 2014, she went to New York City for the filming . They paid for her airfare, her hotel room, her taxi fares and her meals. Here are a few pictures of Laura getting ready for her spot. They sent here these to have , and she is actually going to be wearing a different dress in the actual infomercial, which should be coming out soon. 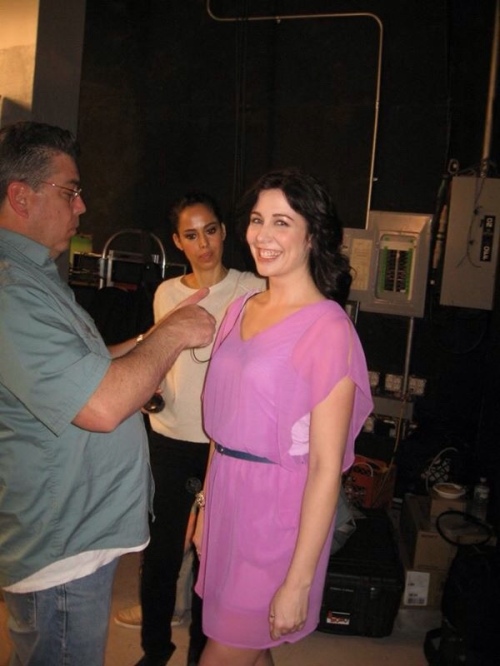 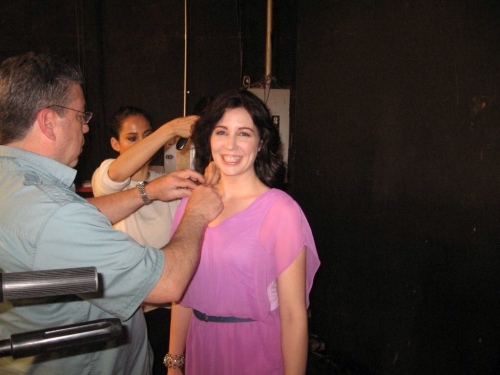 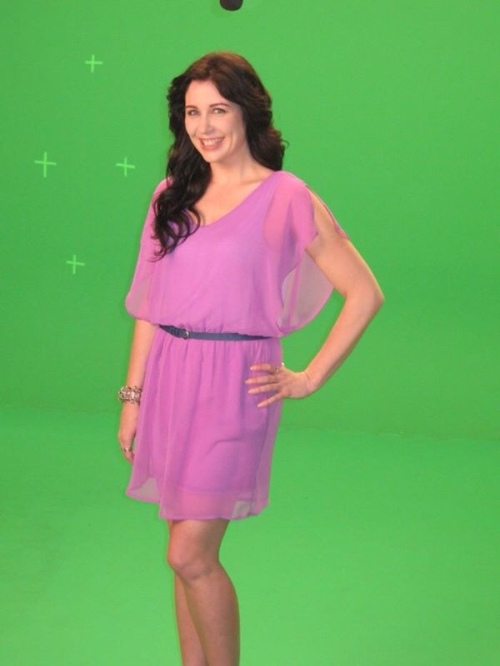 Laura said at the time of this filming she still had about 8 more pounds to lose and that those last 10 were the hardest. A few months ago she received a care package from Leslie that contained one of her new MP4 video players, a tee shirt, a bunch of DVD’S, a headband, gloves and a personal letter from Leslie that made her cry again. She told me that she ended up crying during the commercial shoot of the video portion and that she tends to be emotional about the past. Back to Laura in her own words. 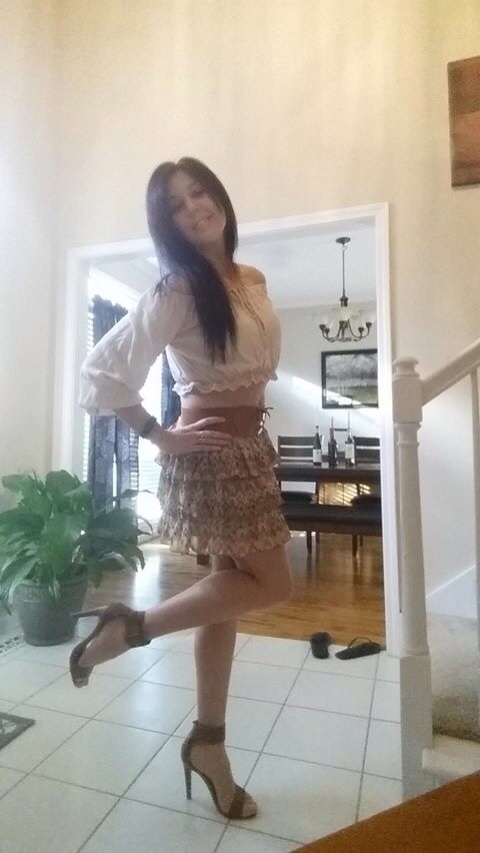 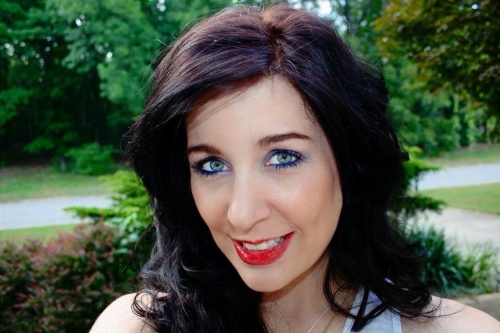 These two pictures are Laura today. Love this head shot, so gorgeous, don’t you think? Now back again to Laura in her own words.

I am the Vice President(co-owner) of Elegant Image Studios, Inc. we do web design, development and graphic design. Been in business for over 11 years and still going strong. Actually since I started this whole lifestyle change, my attitude has totally changed for the better, and I have more energy, which means I get even more work completed. I always say to people who tell me ” I don’t have time to exercise “,YOU can’t afford to NOT MAKE THE TIME to exercise. So Let’s Rock out the good vibes, better eating, and the workouts together.

So that’s out third feature story here in Carol’s Corner and I can’t wait to share more people and their journey. So stay tuned. Till next time, God Bless.