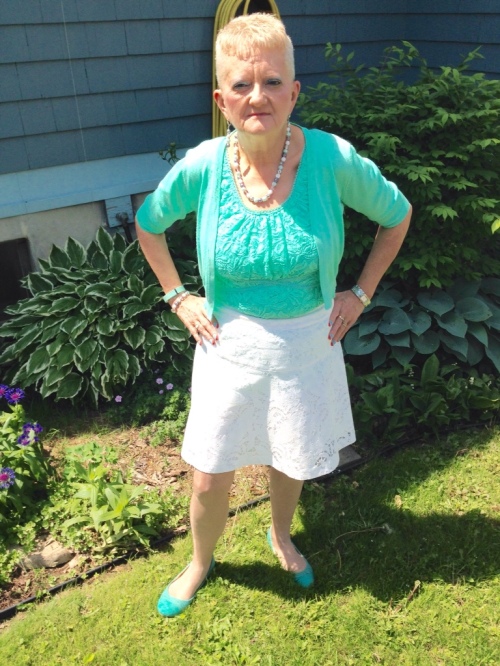 Welcome to a very special edition of Carol's Corner. I am proud to debut something on my blog that is going to be amazing and is going to be able to inspire and help so many people. Periodically as people give me their stories, they will be featured here in Carol's Corner. Tonight we will let the person who came up with this awesome idea tell you her story. I am proud to share Tiffany Cornish Dujinski's story in her own words. I want to thank her from the bottom my heart for sharing this for the world to see. I know whoever reads this is going to be truly blessed. So let's start with the picture's and then her story begins.

This first picture is Tiffany in 2006 at her highest weight. I guess you would call this her before picture. This is Tiffany now. We'll let the pictures do the talking. 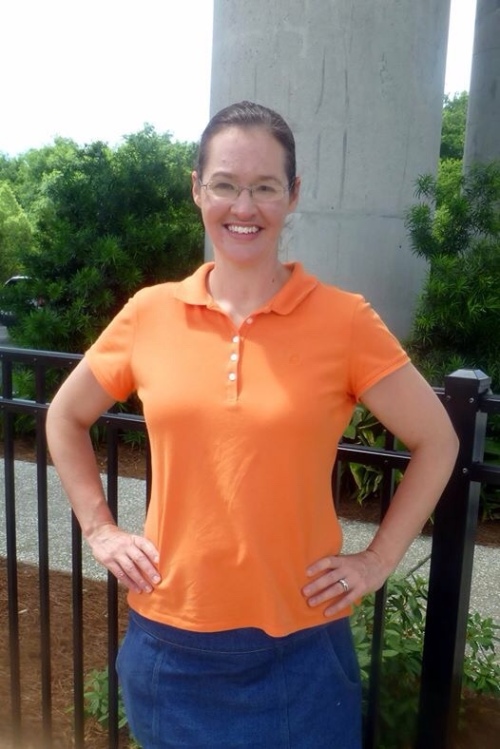 So this is Tiffany's story in her own words.

My name is Tiffany. I am the mother of four handsome and mischievous little boys, ages 5,3,2, and 1, and I'm delighted to share my story in Carol's Corner today. I'm not sure where my story starts. I have struggled with weight off and on(mostly on) for about as long I can remember, and I distinctly remember being about 8 years old and deciding to take up running to help me lose weight. Of course, I sprinted across the yard four or five times and decided running was not for me and went back inside to get some ice cream. So anyway, fast forward to 2006, the year I met my husband, a handsome naval officer. I was teaching 6th grade and weighed in at my heaviest-228 pounds. We met in October of that year and were married less than a year later, in October of 2007. By then I had managed to drop down to around 200 pounds, motivated largely by wanting to look good on The Big Day.

At the beginning of 2009, we were living in San Diego, CA and wanted to book a mule ride into the Grand Canyon for our second anniversary in October of that year. When we called, we were told that the morning of the ride, everyone had to get on the scale fully dressed out for the ride, and if you weighed more than 200 pounds, you didn't go. I immediately found MyFitnessPal to track calories and looked up some workouts on Netflix. Between the two I managed to drop down to 183 pounds. I joked about my “donkey diet“. My plan was to keep losing more, but God had another(better!) idea, and my plans were put on hold when I found out in July of 2010 that we were expecting a baby! That mule ride? It never happened. For safety reasons, pregnant ladies are specifically not allowed on mules going into the Grand Canyon.

Our first baby joined us in February, of 2010, induced a few weeks early because of pre- eclampsia and HELLP syndrome. The next few years are a blur as we moved with the navy four times and added three MORE babies in the space of less than 3.5 years. I tried a little to lose some weight between babies, but about the time I'd start, I'd find out I was pregnant again. Fast forward to July of 2014 when I saw pictures of myself, two months post-partum with baby #4, looking flat-out dumpy.

Before Tiffany continues her story, let's see this picture of her beautiful family. 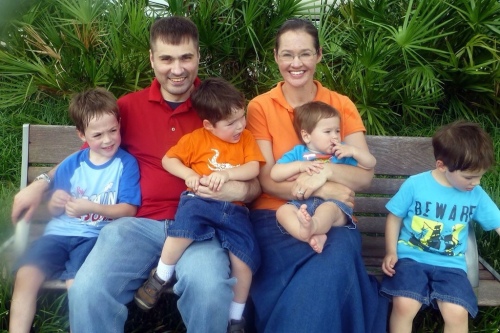 What a gorgeous family! So back to Tiffany.

When I finally stepped back on the scale, I weighed in at 199 pounds. I couldn't STAND the thought of tipping back over into the 200's, so I once again found MyFitnessPal and started tracking calories religiously. At first the weight just fell off, and it was actually really easy. Because I was exclusively nursing the baby, I got 400 extra calories per day, but as he picked up more table food and nursed less, I gradually cut back the extra calories until I eventually stopped them.

I did not exercise at first,telling myself I just didn't have time. Finally, though, I decided to exercise during the hour or so that all the kids are napping at the same time. It had been my “me time” ( mostly my nap time-chasing four boys is hard work!), but I made a deal with myself. On days the baby slept through the night, I'd exercise during their nap. If he woke up,and needed me during the night, I'd sleep during naptime. I really started to appreciate the way that exercise was increasing my energy, though. In many ways I find it more energizing than a nap. Totally counterintuitive, but it REALLY WORKS! Soon I was exercising no matter what the baby had done during the night because I NEEDED that energy boost! I was disappointed to find that Netflix had discontinued their workouts, but fortunately, I had one Leslie Sansone DVD and found a few of her workouts online. Remember that 7- year old girl who gave up running after about five minutes? I wanted to make sure I was actually going to STICK with the exercise before I invested actual money in it. Once I was in a good habit, I started building my collection slowly. I added several DVD's to my Amazon list too, and my parents have gotten me a few for birthdays, holidays, and once for a congratulations-for-sticking- with it gift. Now I use mostly Leslie Sansone DVD's for my workouts, a couple from Kathy Smith, and sometimes if hubs is able to be at home while the boys are napping, I'll walk outside. I'd be remiss if I didn't take a moment to say how IMPORTANT a sense of community has been in my weight loss journey. On the Carol's Corner facebook page ( Carol's Inspiration Station), I find so much motivation and comaraderie. Some days I put the boys down for their naps and I REALLY feel like just crashing into a bed myself. Many, many days, just going to the group and posting the workout I intend to do gives me the motivation to actually get up and do it. And seeing so many people, even senior citizens, racking up more miles than I ever will, makes me feel like my piddly little three mile workouts are totally doable. I have been so thankful for this group over the last year or so.

I now find myself 35 years old, the mother of four VERY active little boys, and the healthiest I've ever been. I'm still 15-20 pounds away from my final goal of 140 pounds. I'm working my way there, but coming from 228,it's not bad. I love that I FEEL good, I FEEL strong, and I FEEL healthy AND I'm off blood pressure meds for the first time in a long time ( WHOLE 'nother story why I was on those-miraculous in it's own right). Sadly, there's part of me that will always see myself as the fat girl, but that might not be entirely bad. It's good motivation to NOT go back there. Before she finish's the story of her journey, now's a good time for her last picture.

AsTiffany put it to me, she loves “wearing her babies”, because it keeps them close. And she said it leaves her hands free to help the others, AND it accelerates the calorie burn from whatever activities she's involved in.

Now back to Tiffany in her own words.

One thing I really cherish is the opportunity to talk to my kids about health. I'm careful not to talk in terms of weight loss or diet or fat with them. They're a bit young for that. But there are lots of words that I CAN use. I often take walks with them through the neighborhood, and I use it as an opportunity to talk about exercise making us “strong” and “healthy”. My three year old will ride his tricycle a whole mile, proclaiming periodically, “I'm getting so strong Mommy!”. When they see me weighing/ measuring my food at mealtime, we talk about making sure we're eating HEALTHY amounts. We've even talked about the terrible disease called obesity and how it makes it really hard for your heart and lungs to work properly, and that the only way to keep from “getting it” or to fix it if you do “get it” is to eat healthy amounts of food and get good exercise . I love that we can have these conversations and I know they wouldn't be happening if I wasn't living out these things in my own life.

So that's the fabulous story of the journey of Tiffany Cornish Dujinski. How's that for a source of inspiration and motivation? This is just the first of what I hope are many more stories of hope and inspiration from other's who are navigating the highways and byways of this journey we all are on. If her story has inspired you in any way, make sure you send her a little message letting her know that her story was a blessing to you. Till next time, God Bless.